Yesterday was really quite a unusual day.

To frame the story, one important piece of information needs to be noted. I am truly phobic of dentists. For almost ten years – from the time my mum said ‘you’re eighteen, sort yourself out’ – I didn’t go to the dentist, even when one of my teeth mostly rotted away. Last year, however,my resolved to finally go to the dentist and get things sorted out, and hopefully remove an increasing mental burden I was carrying around with me. I finally got to the dentist last May, and with being bounced around a couple of hospitals to find one prepared to do all of the work under sedation, it was only yesterday when I eventually got any actual work done.

I was so scared going into it. The only way I was able to function for the days leading up to the treatment was by distracting myself, by ring fencing the idea that I was going to the dentist to have treatment for the first time in over a decade into a corner of my mind and shutting it out completely.

By the morning of the treatment, that shuttered corner of my mind took up a significant portion of my brain. I barely said anything to my wife on the journey to Guy’s Hospital.

After a brief pause in the waiting room, my name was called. I froze up completely, momentarily unsure what to do, in a stereotypical rabbit-in-the-headlights moment. After a few moments, I got up, and followed the nurse to my fate.

The mental ring fence grew. By this point it was having to occupy so much of my conscious mind in an attempt to try and hide from me what was going on I couldn’t actually talk.

“What did you have for breakfast?” the nurse asked, ensuring I’d followed their guidelines on the short walk.

I genuinely couldn’t answer. I vaguely recalled what I had eaten, but the words to describe it – and the way to vocalise them – were gone, hidden away in the locked off part of my brain that was preoccupying itself with doing anything but thinking about the situation I was in. A few other questions followed, and each time I had to look to my wife to answer. I simply couldn’t speak.

I arrived at the dentist’s chair. Unlike my previous checkups, where I had initially refused to sit in the chair, this time I sat down without complaint, resigned to my fate.

The dentist and nurse talked to me a little more. I managed to recover a few words; I was able to tell the nurse I had “cooked bread” for breakfast as she swabbed my arm for the IV. They stuck a pulse meter in my finger, then got a bit annoyed when I started nervously tapping it on the arm of the chair. Looking at the IV inserted intoned my arm, I decided I wanted to take a picture of it. I don’t know why, despite the fear, I still wanted to take a photo. I got my phone from my pocket, but then decided it would be a silly idea and put it back.

Then they added the sedative. I remember saying my eyeballs felt funny – then the next thing I knew, I was sitting in a recovery station with a tissue in my mouth.

This is obviously where things get a bit hazy. What I went in for was conscious sedation, so I was awake the whole time, but I have no memory of it whatsoever. None at all.

So, then, it was naturally a surprise to find I had taken a couple of images of the catheter and the pulse monitor and had uploaded them to Facebook. I also also had a short, badly-spelt conversation with my dad via Facebook messenger, and apparently decided to wear one of those little puke bowls as a bowler hat whilst in the recovery room. I also managed to have enough failed attempts at unlocking my phone it got to the point where it had locked me out for five minutes, which was probably for the best.

Eventually the sedative had worn off enough for them to let me home. At this point I was pretty lucid; it was I that needed to guide my wife out of the building. That said, all this is really foggy at this point. I remember waking up with the tissue in my mouth, because I took a picture of it.

I don’t really remember leaving the building, but I remember being aware of it. I vaguely recall my wife getting a tiny bit lost at London Bridge Station. I also remember her falling asleep on the train home (I don’t, however, remember posting a picture of her asleep to Facebook, but apparently I did). But the few bits of the journey home I have any recollection of are like a dream, or that disjointed, automated journeying you do when heading home when very drunk. The first decent memory I have of the day is waking up with my cat on my legs having fallen asleep on the sofa.

I don’t, for instance, remember commenting repeatedly on the quality of the soap in the toilets. The weird thing is, a lot of what I did whilst ‘under’ was related to the few thoughts that were rattling around in my head before they dosed me.

It was a weird day. I have no recollection at all of the dental procedure, I wasn’t even aware of it happening, but I was aware of the rest of the day; it’s only in the intervening time that the memory has faded like waking from a dream. It was surreal.

What I’ve learnt for next time – which is worryingly next Friday – is to relinquish my phone to my wife before the sedative kicks in. Which will be less amusing for the people who follow me on Facebook, I guess, but at least I won’t then check my own Facebook the next day and go, what the fuck? 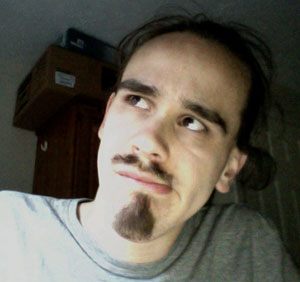 Every so often, my mind will take a situation I’m in, insert a hypothetical comment or action by someone (usually something that’s confrontational in some way), then run with the whole conversation.

Take the other day, for example (well, due to my peculiar drafting process and a inadvertent hiatus from this site, ‘the other day’ was in fact over two months ago, but still, that’s not strictly relevant to this post). On the way home I cycled past an ambulance that had seen to a crash of some sort just by the stadium. Wondering if they might chastise me for my lack of helmet, my mind then envisaged one of them mentioning me not wearing a helmet, then carried on the conversation with my response:

At the point I became consciously aware that I was doing it, and stopped. But sometimes it gets carried away, and I end up getting angry at someone for something they haven’t done.

It happens quite a lot at work, where someone has phoned up asking for assistance, and in the time it’s taken me to walk to the room in question I’ve already run through the events in my mind of what’ll happen when I get there. Usually I end up disappointed because I’ve shown up ready for a fight with someone who’s being unreasonable, and they end up being a sweet old lady with arthritis who can’t operate the remote control, or some such thing (well okay, it’s not often that bad, but you get the idea).

Sometimes I do the same thing, but instead of getting ready for a fight, I’ll successfully get a red-light-running cyclist into a hammerlock until the police arrive, or some such thing.

I’m pretty sure I read somewhere that most men do this.